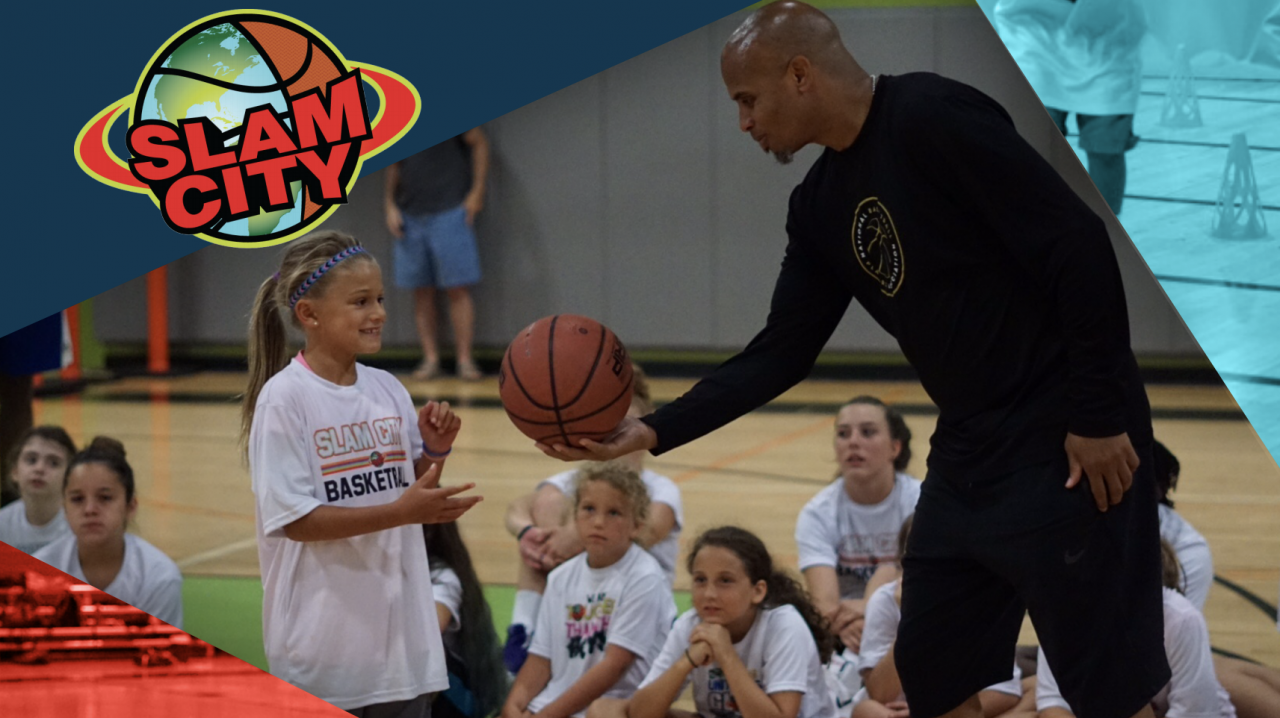 The Jr. NBA World Championship kicks off in Orlando on Tuesday and teams from around the globe have earned their way onto the main stage. One of those teams, Slam City, has been building to this moment for over twenty years. Walt Webb, the on and off-the-court architect of Slam City, has worked tirelessly to create a premier basketball program that spans from camps and instruction to tournaments and club teams. They've accomplished national notoriety while building their players up the right way. We sat down with Coach Webb to discuss how Slam City reached the JNWCs and his overall basketball philosophy.

Going into the Jr. NBA World Championship regionals, you already had one of the top teams in the country, how did you manage expectations for your staff and your kids?Enter heading here...

When you have kids like we have here at Slam City, it's one of those things where you try to humble them. You share situations like Virginia, the #1 seed overall knocked off by UMBC, you let them know that the game of basketball is always about the margin of error. You're competing against that, not the teams. Everyone is one bad play away from altering the roster and you just try to stay in the moment. To be successful, to take it one game at a time, one possession at a time, that's the kind of structure we try to give to the kids.

From a strategy standpoint, we want to go to the JNWCs and we want to attack who we're playing, to get to the free throw line. Even with a talented team, that was focused and had a gameplan, we still had games where we didn't play well during the regionals.We were down in the championship game 21-5, which goes to show you're going to have some up and down moments because at the end of the day, they're kids.

The best you can ask for is effort. Our guys stayed hungry the whole time, and that was consistent throughout our run. We had a plan, we had a mission, and we still have a goal that we're trying to reach.

The unsung heroes of youth sports are often the coaches. How much of your success can be attributed to your staff? Enter heading here...

The rules of the Jr. NBA tournament state that we can only have two coaches on the bench, but it goes much deeper than that. We have other coaches involved, and by having them around the team, the kids know that we have their best interests at heart. As for our staff as a whole, the key is consistency. We want our players to know that the way we coach on Monday is the same way we're going to coach on Tuesday.

That consistency translates to the way we coach in tournaments. We'll tweak some things here or there, but the nuts and bolts are going to be the same. Our coaches are so prepared, and because of that I can focus on the game. I have great coaches in Jason Murphy, James and Alvin, I know that from the statistical side, regardless of what the scoreboard says, I'm getting quick intel immediately. So even though we only have two coaches on our bench, so much other work has led up to that point. We had a coach on different courts scouting teams and putting together a plan. We weren't just depending on our talent, we are able to give our kids as much intel as possible. We are able to chart the tendencies of other kids, which give our team as many cheat sheets as possible.

We used to go out there and just figure it out. Today there are all kinds of athletic talent and diverse strategies, so there's much more to it. We have plus-minus stats now, so a kid scoring 20 points per game may be just as valuable as a defensive stopper that has X-amount of steals or the point guard whose assist-to-turnover ratio is exceptional.You have to have a team of coaches, playing different roles to lift your kids up. On our team of coaches everybody has a role, from cheerleading all the way down to maintaining stats. This creates the right kind of environment, giving kids the encouragement and support they need, so that they don't have to look to the bleachers to get it which could be a distraction.

You mentioned the advancements in analytics in the game. How have you embraced technology over the years? Enter heading here...

Ten years ago, I started talking about stats because I saw the value of them and recognized that's where things were headed at the professional level. Antonio Daniels, a long time NBA great, and I are best friends and he started talking about the importance of stats when he was playing with the Wizards. Giving the kids facts they can use, like how many times an opponent comes down the left side of the floor or where certain players score the majority of their points from, players respond to that kind of information. How often a team plays zone as opposed to man-to-man and how often a team gets to the free throw line — using stats like that became the norm maybe ten years ago. When I first brought it to our players, it was as if I was speaking a foreign language. No one initially was paying attention to that, it was barely being talked about in college, to be honest with you. Now everything is analytics-driven, but ten years ago I was pulling it together for the kids by hand. We actually came up with a little program that we have here APS (Athletic Performance Score). We use it in our camps, we give report cards out every Friday, and it lets the kids know exactly where they're at performance-wise. How fast you run, how fast you change direction, how high you jump — it's almost like a combine score. We try and get the kids to understand that down the road that score is probably going to be your identity as a player. Your athleticism and the analytics around that speak to your potential and how people evaluate how far you're going to go.

Ten years ago, I started talking about stats because I saw the value of them and recognized that's where things were headed at the professional level.Walt Webb, Slam City

If you have a high basketball IQ, you're explosive, you're long, great wingspan, that's all well and good, but were just trying to get kids to understand that there's more to it than just putting the ball in the hole. At Slam City, teaching kids subtle techniques that help them stay on the floor a little bit longer or doing things that boost certain percentages and decrease other percentages in certain areas, that is what coaches are going to be looking at in terms of recruiting. It took ten years to refine APS so that our kids could start understanding that it's not just your report card anymore it's your ACT/SAT scores. The world has arrived in this data-driven place, and sports are going the same way. We embraced that and it's paid off.

Are there any broader goals that you have for the experience for Slam City in Orlando?Enter heading here...

Most definitely. I was talking to quite a few people after we were fortunate enough to win the Mid-Atlantic regional and there was one thing I wanted everybody to know. My goal going into this was to make sure that the kids had an opportunity to tell a story. As a player I didn't have a chance to tell my story, a lot of people know who I am today because of the teams I've coached and the successes I've had, but telling a story as a kid is so special. When you see the little snippits and clips of Kevin Durant as a kid running up that hill and telling his story, he didn't start out as an NBA veteran with two MVPs.

I want these kids to tell their story in the same way and to also represent their area with pride. Basketball for a lot of people is a lifestyle, and the opportunity to compete for something, win lose or draw, it's a life lesson and an unbelievable life experience. For me, I played basketball constantly growing up, but the moment I got outside of a 25-mile radius of the state where I was playing basketball things changed. I got to go to China and play. The experience, what I saw, what I felt, who I talked to, translating a different culture of people and the way that they think. That was powerful, my view on things changed. So this opportunity, the interaction of playing and representing the small number of teams from the US and getting ready to compete against the rest of the world in the first inaugural event, that's history. The sense of accomplishment for the kids on this team can't be the end goal.

Beyond the games themselves, the tournament is a life-altering event from an educational standpoint. The NBA and the Jr. NBA have worked to open the kids' eyes to what it is that they really have to do to be successful. The life skills class the Jr. NBA offered spurred a lot of great feedback from the kids. From the dos and the don'ts, to the speakers correcting the kids who weren't sitting properly, in terms of body language, there were valuable lessons left and right. Exposing them to something outside of a local state event or a national event, I mean we're talking about a global world title, some of the best resources and speakers, they can forever say they participated in this and it's an unbelievable accomplishment that can carry with them.

Jaden Johnson of Annapolis ready to compete on big...
Community Work with the NBA ! 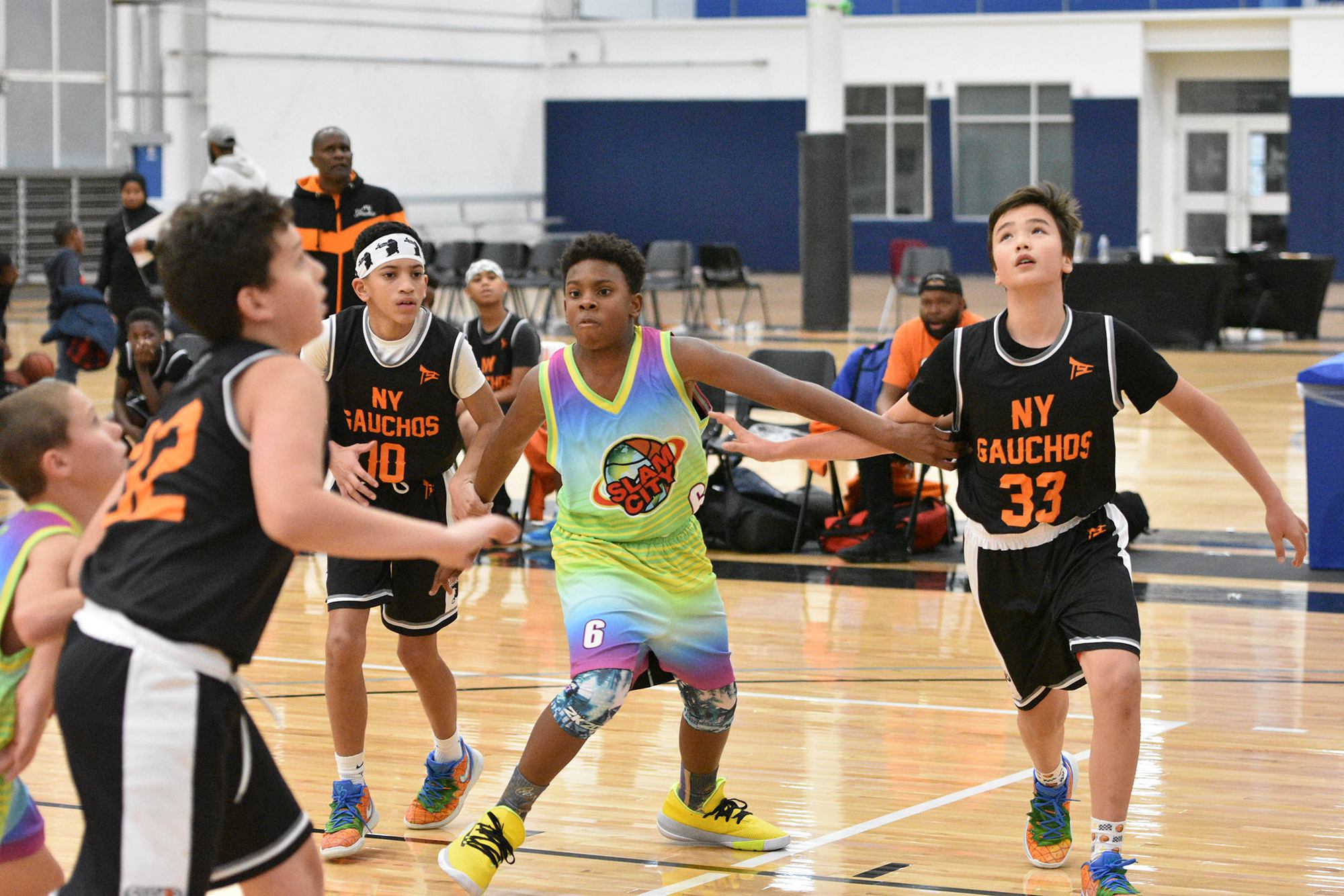 The Slam City Team is one of the best in the nation. With winning experience across the team, Slam City can provide the tools and knowledge to get each player to the next level in their development on and off the court.